AgriMestMix in the organic sector

From 2018 the product AgriMestMix is ​​on the SKAL list.

Dairy farmer Auke Stremler has his own ideas about soil fertility. He will not allow a slurry injector on his land and rather than use a chemical fertilizer he would prefer to be able to spread more muck. The land around his farm in Jorwert yields up to five quality cuts a year.
His secret weapon is a soil improver.

Auke Stremler walks into the field armed with a spade. His cows are grazing in the background and the church tower of Jorwert on the horizon completes the idyllic picture. Minutes later, he lifts a piece of turf. “Look at that thick layer of humus under the grass. The roots go
down a long way too. There’s even a earthworm in there.”

In the Frisian village of Jorwert, around eight kilometres south-west of Leeuwarden, Auke Stremler has a dairy farm with eighty cows, fifty youngstock and 58 hectares of land with a lutum content of 60%. Stremler started learning more about soil fertility nearly twenty-five years
ago. “I belonged to a young farmers association where we sometimes had guest speakers. On one occasion, someone came to tell us about the soil improver AgriMestMix, which was said to result in a more homogeneous, healthier manure. 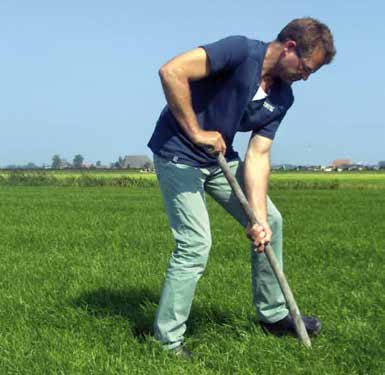 Rinze Joustra of Rinagro, the manufacturer of the product, was also there. There are so many soil improvers on the market which have no effect at all, that you tend to think: I’ll believe that when I see it. But something about this product felt right straight away.”

The product turned out to be a good solution for a problem on the farm, which his parents still owned at the time.
“Mixing slurry in the five pits of the cubicle stall used to take us a whole day. And the cost of diesel to run the mixer all day was quite considerable too.Within a week of using AgriMestMix, however, the manure was much more homogeneous. Suddenly, we could mix all five pits in an hour. The more homogeneous composition also increased the storage capacity of the pits and was better for spreading. Since then, I pour it over the grates in the stall, into the slurry, once a week.”

The soil improver, which is based on bacteria, triggers the degradation of the manure, converting the nitrate to nitrogen bound as ammonium. “So there is no more volatilisation of ammonia”, Stremler explains. “The manure emits a sweet, pleasant smell, a natural, healthy smell, even when it is being spread. Due to the initial degradation, the manure is absorbable as soon as I’ve spread it on the land. With noticeable result within days; the grass is definitely greener. I can also spread the manure in dry weather with no risk of burning.”

Thanks to the better manuring, the grassland has developed a layer of humus; a spongy layer that absorbs and retains moisture during wet periods. “During dry periods, that water is gradually released, so that the grass can continue to grow. The humus layer also ensures better rooting, a better
soil life and better permeability. The better rooting in turn ensures optimum utilisation of minerals, as the roots are better able to penetrate the soil. The soil aeration has also improved. It’s a cycle; improving one aspect will automatically improve the rest. We do the same as the Annual Nutrient Cycling Assessment (KringloopWijzer) but have done so for much longer.”

Not without result. “Not only is the grass yield higher, the grass also has a higher percentage of dry matter,”says Stremler. “The grass contains very little moisture, so the amount of grass you cut is your end product.” The yield is much better than it used to be, in terms of quality. Thanks to AgriMestMix the soil life has improved and the yield has increased. The grass grows more densely and regrows faster after heavy cuts.
I can achieve five cuts in one year.”

Stremler does as much as he can himself to keep his grassland in optimum condition. He only hires in an agricultural contractor for the silage clamping “Manuring is a passion of mine. By doing that myself, I know exactly how it’s been done.” He has had two extra wheels fitted to his loader wagon, to distribute the weight evenly across the entire width to reduce the risk of soil compaction.

Stremler points to the field behind his farm. “We were silage clamping earlier in the week. My agricultural contractor uses enormous machines;
you can still see the tracks in the grass. That is a disadvantage,” he agrees, “But unavoidable, given that he has to deliver such high productivity within a narrow window of time.” Stremler considers pasture maintenance a waste of his time. “Prevention is better than cure, as is preventive soil
care beforehand or working with lighter machines at different times.” If it has been raining here for three days, then you should just stay off the land.”

Approximately half of Stremler’s land, around 28 hectares, is classed as private conservation area. 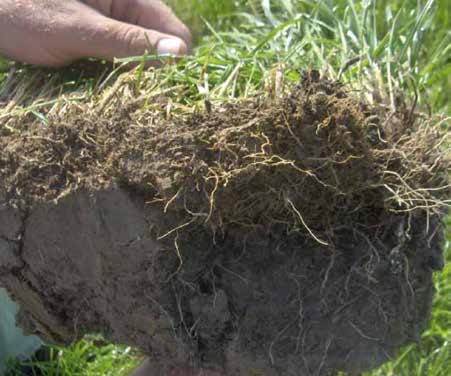 Postponed cutting dates of 1 June, 15 June or 1 July apply for these areas. Muck spreading is allowed on this land, slurry spreading is not. However, the provincial authorities have authorised to spread slurry with AgriMestMix. “Bird counts have demonstrated that land on which I have spread slurry with AgriMestMix actually has more farmland birds nesting on it. The birds choose to nest there because the soil life is better. Strangely enough Natuurmonumenten, the Dutch Society for Nature Conservation, focuses on soil degradation but far fewer birds choose to nest there. These are not considered grounds for derogation, so I am not allowed to spread very much manure, 170 kilos of nitrogen rather than 250. Neither am I allowed to spread 30 cubic metres at one time.”

Stremler would like these grounds to apply as grounds for derogation, enabling him to spread more manure, but must comply with the Dutch Manure Law. “Per cut I can spread 15 to 20 cubic metres of manure. You reach a point that you run out of manure but supplying more manure is not possible due to the limits on manure storage. We are allowed to apply more fertiliser nitrogen to the clay, but I don’t need to. I would much
rather spread more manure, it is much healthier for the soil. The soil doesn’t need more chemical nitrogen. Yet current legislation is such that I have to dispose of manure.”

Using AgriMestMix can reduce the use chemical fertilisers drastically. By at least half. Stremler continues: “I spread no more than 100 kilos of calcium ammonium nitrate per hectare per cut. I then spread the manure on top of that. I try to use less and less chemical fertiliser; using too much can slow down the grass growth. I would rather use less. We’re experimenting with the growth, so to speak. How much further can you reduce the use of chemical fertilizers?
Since the beginning of this year I have been able to farm organically, thanks in part to AgriMestMix.”