Introduction
This inquiry has been made within the scope of  a graduation assignment of the study programme : Animal and Dairy- farming at the Van Hall institute in Leeuwarden (The Netherlands).
The inquiry is made by order of : Rinagro BV in Piaam (The Netherlands).

In subjoined graph is clearly shown the dry matter content in the test drum containing Agri-mest is lowering. After 10 weeks of treatment , the dry matter has lowered more than 1%.In non treated manure the dry matter percentage remains on the same level.

During the weekly treatment of the test drums, both drums were frothed to remove the scab and to add the additive to the drum with the treated manure.
After 7 weeks of treatment it was markedly, the test drum containing treated manure was much better to froth, than the drum containing non treated manure.
The manure did become more fluid and the scab formed in the agri-mest drum after 1 week,  showed to be less thick compared to the scab in the control drum. Also the smell which is liberated during the frothing is decreased, compared to the control drum.

Results of the grass test
A significant difference is noticed when you divide the data into users of Agri-mest and not-users. It shows that the use of Agri-mest over several years brings in a higher amount of crude protein an and a less amount of sugar. Crude protein and sugar are linked. It is also markedly that non users even have a negative
imbalanced protein level. The results of the test are reflected in the following graph in which the effect is shown by using it for more than one year. This counts for use on sandy soil, clay and peat-soil. 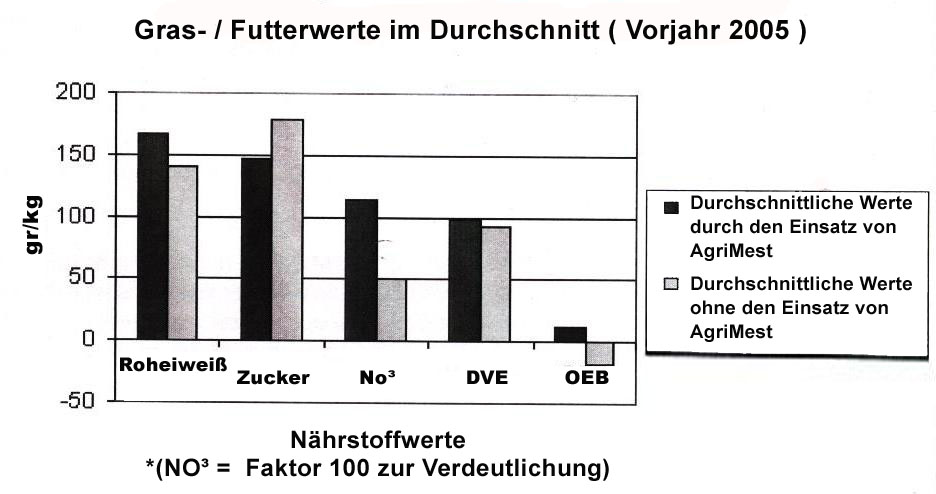 Markedly is the high level of nitrogen (NO3)in the analysed grass of Agri-mest users. With fertilization a stock of nitrogen is given to the plant, which is partly absorbed as nitrate. The plant converts nitrates into proteins for its  growth. If more nitrates are absorbed than converted, an over-measure  of nitrogen will be generated in the plant. We may conclude, with the use of Agri-mest the absorption of nitrate ends up faster than the conversion into proteins. Based on this knowledge it is possible to lower the use of artificial  fertilizer, when Agri-mest is used.

The high values of nitrate are no danger to animal health. The highest value of NO3 in the analysis is 1.30 gr.  per kg. dry matter. Also the value of unsteady protein in the grass of users of Agri-mest is much more high. The amount of imbalanced protein  is a graduated scale for the surplus or shortage of imbalanced protein to form bacterial protein in the rumen. It is known, by giving more nitrogen to the plant, the amount of crude protein will increase and also the imbalanced protein level will increase. The higher amount of crude protein goes at the expensive of the carbohydrates in the grass.
You may conclude, manure treated with Agri-mest has got nitrogen which is more easy available to the plant. The manure is easier to mix, because of the inclined dry matter level.

High percentages of sugar in the grass silage is not always positive, partly it is used for conservation, what is left can be used by the cow. When there is too much of sugar left in the silage after conservation, there will be a danger for the dairy-cows to get rumen acidification. It is easy too get more milk by feeding crude protein, a high level of crude protein in the silage is more appealing than a high sugar level.

Conclusion of the manure test.
The  percentage of dry matter declines with approximately 8 percent, so it is easier to mix. This decline we saw in the measuring we did ourselves, but also the analyses showed the same decline.

Very clearly is the swing from organic nitrogen to ammoniacal nitrogen. This kind of nitrogen is able to stay in the liquid solution of the manure treated with Agri-mest, because of this, the nitrogen is much faster available to the plant.

The test demonstrates, using Agrimest, it gives 0.3 kg more of mineral nitrogen within 1 cubic meter. By giving 30 cubic meter of slurry, there will be 9 kg of nitrogen more available to the plant.
When normally is given 70kg. of artificial fertilizer, it means a 40 percent saving!

Conclusion of the grass test.
Here the conclusion is, Agri-mest has an improving effect on the nutritive value in the form of crude protein and  on the imbalanced protein level.
Also the protein which is digestible in  the intestinal declines by using Agri-mest.