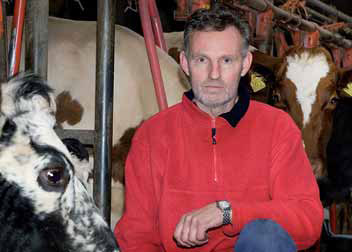 Once a week, Piet van Bezooyen pours a can of additive into the small slurry pit. The pit is located at the end of the solid floor of the cubicle stalls, which have been in use since 2007. The watering can contains 1 litre of AgriMestMix dissolved in water. AgriMestMix is produced by Rinagro in Piaam (Friesland, NL). Van Bezooyen started using the product six years ago. At the time he still had dairy cattle in the stalls. Mixing and emptying the manure pits behind the cows was always a problem. The manure became thinner and more homogenous when he used the product. “It really works. But you have to use it every week, else the manure will all get caked up again.” The work only takes about five minutes a week. According to Van Bezooyen the costs are fairly reasonable: €1,000 a year or 59 cents per cubic metre. “The manure doesn’t just become more homogenous: the action of the nitrogen is different too. Conversion in the manure means less leaching and evaporation.” There are various studies that prove that. Less fertiliser is required. But the cattle farmer does admit that it is also a matter of believing. Anyway, he feels good about it. “I know that I used to spread about 800 kilos of CAN per hectare. After we started using the additive, it decreased to 500 kilos per hectare pretty quickly.” He does not believe that grass yield is lower than in other years. He now stops using fertiliser by the end of July and the grass grows on until well into the late season. To him, this shows that the nitrogen in the manure is not lost, but is entirely available for the crop. Because 35 cubic metres of manure is available per hectare, the cost of the manure treatment is €17.50. “And that saves me 300 kilos of calcium ammonium nitrate. That’s quite a chunk.”