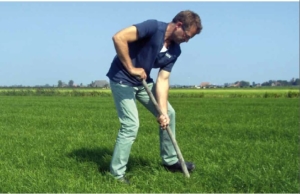 Dairy farmer Auke Stremler has his own ideas about soil’s fertility. Instead of chemical fertilizer, he would like to have the opportunity to spread more manure on his land. Out of his grassland in Jorwert, The Netherlands, he is able to get five high-quality cuts per year. His secret weapon is a soil improver.

Auke Stremler walks on the land with a shovel in his hands. In the background there are grazing cows and a horizon including the church tower of the Dutch village Jorwert; an idyllic picture. Moments later Dutch farmer Auke Stremler holds up a sod of grass. “Take a look.. Under the grass you can immediately see a thick layer of humus. There is even a worm in it. ”

Soil improver
In Jorwert, situated in the north of the Netherlands, Auke Stremler has a Dairy farm including 50 young cattle and 58 hectares of land which is 60 percent lutum content.
Twenty years ago, Auke Stremler began to study soil fertility. At that moment Auke Stremler joined an Agricultural youth club where he invited speakers. Back then, someone spoke about AgriMestMix, an improver in soil fertility. He said that using AgriMestMix results in manure that is more homogeneous. Rinze Joustra, the current producer of AgriMestMix, was also attending this presentation. There are many products claiming an improvement of soil’s fertility, but in practice you can not see any result. But I had a good feeling with this product.”

Mixing the manure
AgriMestMix turned out to be a solution for the problem we had at the company. ” It look a day for us to mix five pits, also the consumption of diesel for the mixer is quite a lot. After implementing AgriMestMix, it took a week before the manure was homogeneous. Instead of a day of work, it took one hour to empty all five pits”.
Also, due the fact the manure is homogeneous, we got more space in the pits and the composition of manure was better.”

Humus
The soil improver , which works on a basis of bacteria , creates a kind of digestion of manure. Also the manure converse from nitrate to ammonium nitrogen. ” So I have no loss of ammonia. “There is a friendly, sweet smell of manure. A healthy natural fragrance , even when spreading manure on the land . Because of digestion of manure, the manure is immediately absorbed on the land. Within a few days I already can see the results; the grass is more green.
The improved fertilization of the soil created a humus layer. The grassland is a sponge -like layer, that absorbs and stores moisture in wet periods . ” In dry periods, water is released slowly , so that the grass can continue to grow. So by using AgriMestMix, I have a better soil and water handling capacity stimulating deeper and dense rooting. The deeper and dense rooting takes care of a better utilization of minerals. Also, the aeration of the ground is better.
In the soil you get a kind of cycle. As one aspect is better, the rest gets better .

Five Cuts
According to Stremler, AgriMestMix not only resulted in a higher revenue from the land, also the dry matter content increased. “There is very little moisture in the grass , so the amount of grass you mow , you also have as a final product . The quality of the grassland improved and is better than before. The grass is more dense and there is a faster regrowth after heavy cuts. In only one year I have collected five cuts. I am satisfied with that result, especially given the discussion on increasing the revenue of the grassland in the context of abolishing the milk quota in 2015. ”

More manure
Stremler would like to spread more manure on his land, but runs into the manure law. “Every cut I bring 15 to 20 cubic meters of manure at a time . At some point you have no more manure available . More manure is not possible since I reached the maximum of manure storage. On clay we have received this year more space in terms of fertilizer nitrogen, which is unecessary. I would prefer spreading more manure , which is healther for the soil . The chemical nitrogen is actually no longer required for the soil. ” Since implementing AgriMestMix the chemical fertilizer can be drastically reduced towards 50%. Stremler argues, ” I continuously try to minimize the chemical fertilizer. Too much chemical fertilizer can break down the growth of grass. Taking that into account, I prefer less. I am constantly playing how far I can go with the growth of grass. How far can you go in reducing chemical fertilizer ? This year I have not used fourty percent of the allowed amount of fertilizer . ” 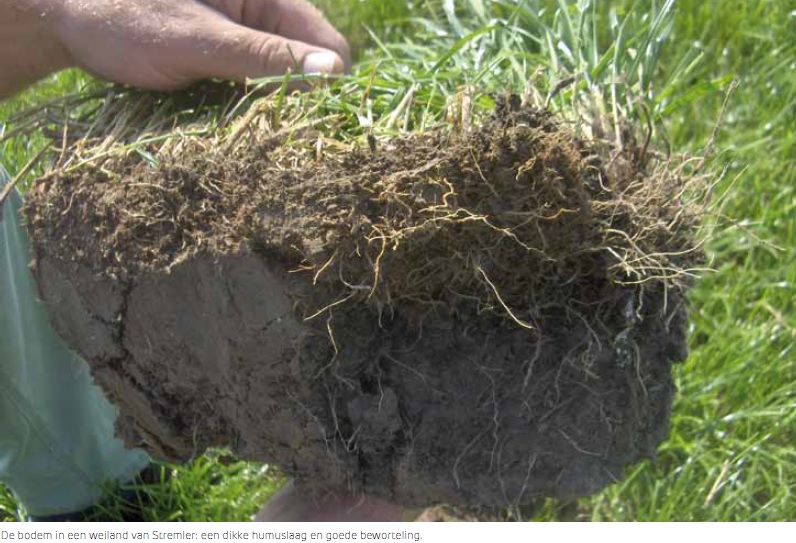